More information on the match and on Ross County’s recent performances can be found on The Jailender website.

Ross County enjoyed their first match at home since becoming the SFL First Division champions, against Dundee, who sit in second place in the league table.

Dundee, with four ball-playing midfielders and Steven Milne dropping off the front line, found enough possession of the ball to threaten. Despite that, Dundee never got behind the Ross County defence once, with only the occasional shot from outside the box testing County goal-keeper Fraser. It took until 80 minutes for Leighton McIntosh to hit the only shot inside the County box, but it was mis-hit wide of the far post.

Dundee lacked natural width for most of the match and even when they brought on a winger towards the end of the match – with the score already at 3-0 – it took the full-backs to try to create the width needed to stretch Ross County and create holes in their defence. It never really happened, because there was little off-the-ball movement further forward. The two teams set up in similar looking 4-4-1-1 formations. For Ross County, Gardyne linked up with McMenamin. For Dundee, Milne was the second striker to McIntosh. Milne dropped deeper than Gardyne, to give an extra man in midfield for Dundee and sometimes to try to check Lawson.

The general theme of the first half was that Dundee used Milne to drop into midfield from the forward line, to allow Dundee to keep the ball. Ross County were always comfortable defending without the ball and waited for their turn to attack, which they did successfully.

It didn’t take long in the match for County midfielder Vigurs to impose himself on the match. The ball fell kindly to him close to the Dundee penalty box. He never managed to find the on-rushing Gardyne with a cushioned pass, but Dundee’s defence was had large gaps at a very early stage (within the first five minutes). It was an ominous sign.

Dundee’s aim was to try to keep the match in Ross County’s half. Milne dropped surprisingly deep at times, to ensure that Dundee had an easy option to pass to.

However, their passing game was slow and a little predictable, with a lack of cutting-edge movement off-the-ball to worry County’s defence. Ross County almost always had two sets of four players defending behind the ball, which Dundee found difficult to break down. 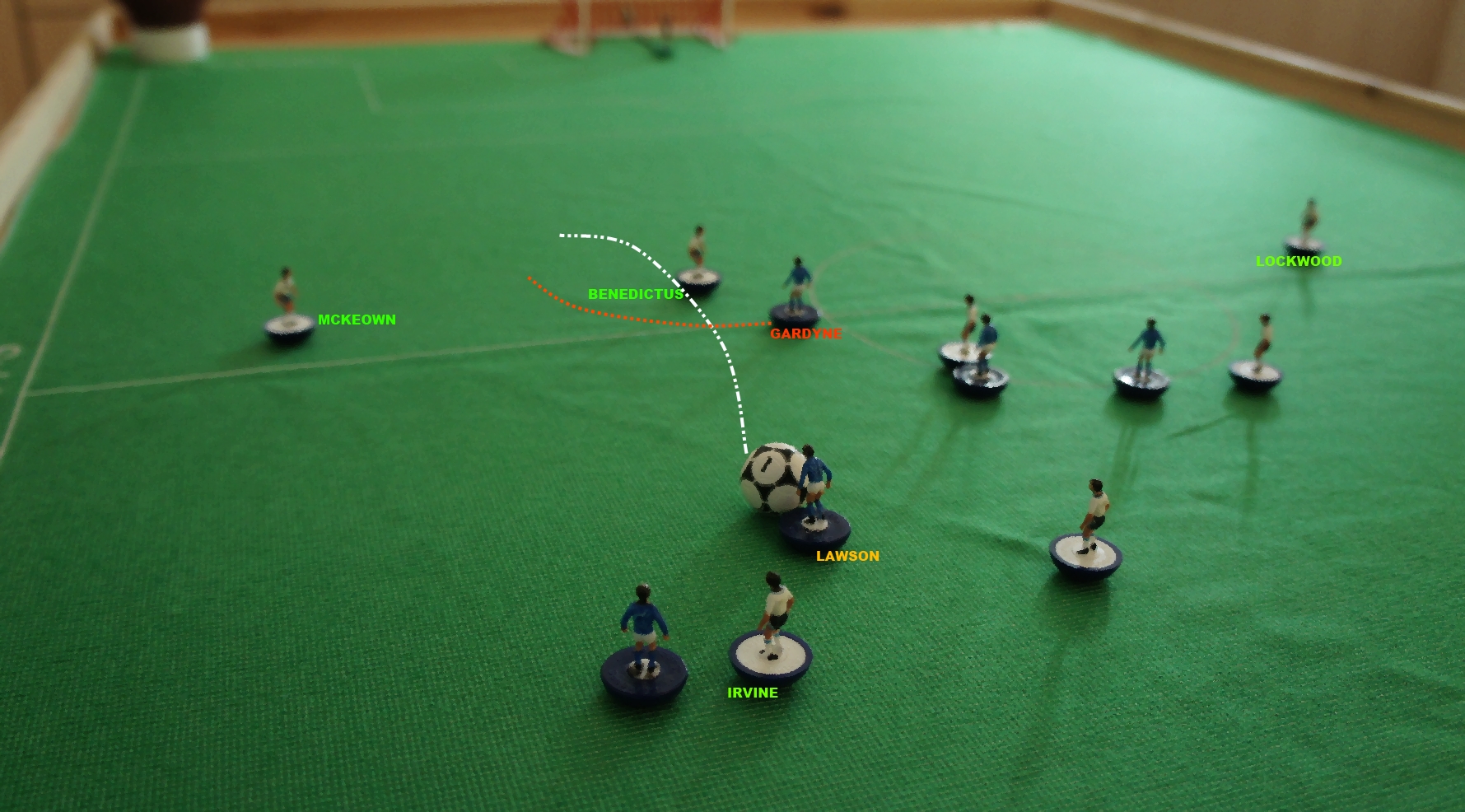 There were a number of times in the match that Ross County looked to capitalise on careless passing in the centre of the pitch. In this instance, Lawson releases sponsors’ man of the match Gardyne into the left-hand channel to set up a chance.

Once again, the Dundee defence was exposed, with far too much space between the centre-backs.

Michael Gardyne scored the first goal of the match, after initially linking with McMenamin close to the centre circle but then getting the break of the ball after a tackle on McMenamin. Dundee’s defence were not organised, due to the midfield trying to play possession football further up the park and being caught in the transition. Gardyne danced through the rest of the defence for a goal that looked likely to arrive.

With the match at 1-0 to Ross County after 10 minutes, the onus was on Dundee to try to get back into the game.

Dundee’s midfield shape never seemed to have much of a balance, despite the sometimes easy possession they enjoyed outside County’s ‘third’ of the pitch. O’Donnell, McBride and Fotheringham are arguably too similar a type of player. No-one was willing to make a breaking run beyond the forwards, or hug the touch-line, to make County’s defence think twice about their defensive shape. County, in contrast, did both at different intervals, to bring variety in their play.

Studying the picture above, if one could ‘join the dots’ of the Dundee midfielders, one could almost draw a straight line from McBride, the deepest midfielder, to the striker McIntosh. That was a clear symptom of the lack of how narrow the team was and of the lack of off-the-ball movement.

With all of Dundee’s midfielders tucking in so much, in an effort to retain the ball, it meant that Dundee’s full-backs were relied upon for width.

Indeed, it was little surprise that Dundee’s most threatening shot in the match arrived from one of their full-backs. Right-back Gary Irvine cut in off the right flank and curled a shot towards the inside of the far post, which Fraser did well to save. Irvine was probably Dundee’s most accomplished performer on the day, but he couldn’t penetrate the Ross County defence from the flank on his own. McCluskey and Riley were missed.

When the possession-based approach wasn’t working for Dundee, they tried the occasional testing long ball towards the channels for McIntosh and Milne to chase. Ross County centre-back Scott Boyd is probably at his best in reading these types of long passes and Dundee never got behind him, with the exception of the one half-opportunity for McIntosh on 80 minutes which was mis-hit.

While Dundee didn’t use much width – particularly in the first half – Ross County attacked using the full width of the pitch.

Lawson and Quinn were not shy in looking for the early ball to the County full-backs and wide midfielders. Vigurs himself often likes to come in-field (more of that later), but is adept at keeping wide to test the opposition full-back. Ross County enjoyed enough possession of their own and showed that they had a variety to their approach, which is in contrast to Dundee’s mostly slow approach to breaking down the County defence.

Otherwise, Ross County would look for the ‘vertical’ ball through the middle for Gardyne to collect. This picture illustrates the space that Gardyne found for himself after Fraser’s long throw from the County goal. Gardyne was helped by McBride stepping off him, which allowed Gardyne to play in McMenamin on the edge of the box.

Although that particular move didn’t result in a goal, County manager Derek Adams would have been impressed with the shape in the quick transition from defence to attack. County’s shape in this picture resembles a 4-4-2 diamond. Rocco Quinn’s positioning should not be under-estimated, as he held the line as a de facto second centre-forward. That kept Dundee’s two centre-backs committed to marking, which gave the space to Gardyne (when Dundee’s full-backs were higher up the pitch). Quinn had one of his best games for Ross County, in his role as an all-round central midfielder (probably his best position).

Not much changed to the pattern of the match in the early stages of the second half, compared to the first.

Lawson and Quinn together began to dominate the centre of midfield more, possession-wise. Lawson was always eager to find the running midfielder. Quinn obliged in this instance, but could not threaten with a shot from a tight angle.

Gardyne was next to benefit from an accurate ball into the channel, but McMenamin couldn’t connect to the hard-struck ball that was hit across the goal-mouth.

The build-up to the second goal on 61 minutes was very well worked. Vigurs had drifted from the left flank on to the right and held off challenges for the ball. Vigurs combined with Brittain and Lawson in a triangle, before running beyond the Dundee midfield to overload the defence. Vigurs’s cross from the bye-line at the edge of the penalty box was the assist for McMenamin’s finish, but Lawson’s vision to find Vigurs was as good as Vigurs’s movement.

County scored a third goal shortly after, with a low Vigurs cross from deep finding Gardyne at the near post, to flick the ball beyond Douglas in the Dundee goal.

It seemed too late in the match by the time that Dundee began to use some width in the team.

O’Donnell found left-back Lockwood high up the pitch in this instance. Lockwood got his cross in, which was cleared at the near post, but it was the first time that Lockwood managed to find any kind of penetration. Until then, Dundee didn’t switch the play from right to left often enough, or early enough. It took for Dundee to be 3-0 for any changes to be made. The game appeared to be needing a natural winger, like Nicky Riley, to try to beat County’s full-backs and play balls across the County goal.

In an almost identical picture to the last, in terms of player positioning, Riley came off the flank to look to shoot at goal. Riley was invariably crowded out and the danger to County’s goal avoided. Riley never hugged the touch-line as one might expect, rather he played an almost identical role to Fotheringham, coming in off the wing to play the ball through the middle.

The rest of the match was relatively flat in terms of chances created, other than McIntosh’s effort described above, around 80 minutes. Immediately after that, midfielders Quinn and McBride received second yellow cards for arguing. That theoretically opened the game up a little, but the contest was over at that point. Douglas superbly tipped the ball on to the cross-bar from a Vigurs free-kick. County went to a 4-2-3 for the last five minutes after substitutions, but otherwise there was little of note.

Dundee didn’t look like they had much of a strategy to beat Ross County, other than to retain possession in County’s half and hopefully find an opening in the defence to play Milne or McIntosh through. The lack of width other than from the full-backs exacerbated the lack of balance in the midfield. O’Donnell and McBride are probably too one-dimensional a partnership compared to, say, Lawson and Kettlewell (now maybe Quinn). Dundee will need to find a suitable player to partner O’Donnell to get back to their best form. They clearly miss Gavin Rae’s departure to Aberdeen in January.

Ross County looked sharp across the whole pitch and deserved to win by the margin that they did. The variety in approach and the speed of their counter-attacks unsettled Dundee’s defence.

Ross County are now unbeaten in the league in thirty-one matches and travel to Greenock next Saturday to play Morton. This writer will not be in attendance but hopes to have a report on the last home match against Hamilton on 28/4/12.