Ross County ended up as relatively comfortably winners here, with Falkirk eventually finishing with as few as nine footballers on the park.

County were cruising after the first quarter of the match, with Rocco Quinn following Brittain’s penalty. The penalty was awarded with Falkirk goal-keeper McGovern being sent off for fouling McMenamin after Kingsley had put McGovern under pressure with a poor back-pass. The match was even up until that point, with County having a few attempts at goal early on.

The second half was a strange affair, with Ross County unable to extend their advantage and at times not able to dictate the pace of the match. Falkirk’s midfielder Millar scored from a wonderful free-kick around twenty-five to thirty yards out. Other than that shot and a headed effort that was sent wide by El Alagui, Falkirk could not find any penetration into County’s defence, despite some tidy possession football in the middle third of the pitch. The two teams set up in broadly similar set-ups. Ross County had Gardyne playing off McMenamin; Gibson off El Alagui, in 4-4-1-1 formations. It could be said that Gardyne is more a forward than a midfielder, Gibson vice versa, but both players enjoy playing behind another striker. Falkirk’s formation was more fluid than County’s, with Weatherston and Fulton coming off the flanks to support El Alagui, with Gibson dropping deeper.

Ross County compensated for Vigurs’s suspension with right-footed midfielder Rocco Quinn taking his place. Quinn scored his goal from an orthodox left-wing position, collecting the ball at the far post but shooting at the top corner near-post with his right foot.

Falkirk had two suspensions to deal with: Kingsley came in for Dods at centre-back; Bennett filled in at right-back for Duffie.

Ross County were marginally the better team until the sending off. In terms of talent available to both teams going forward, there was arguably not much between them.

Ross County’s full-backs were better players going forward than Falkirk’s equivalents, which so often makes the telling difference between teams set up in 4-4-2/4-4-1-1 formations.

Indeed, one of the first signs of the match opening up was when Ross County spread the play wide right, for the ball to be cut back and left-back Scott Morrison drilled a low shot narrowly wide.

Falkirk, on the other hand, missed Keiran Duffie’s forward runs from right-back. Falkirk’s midfielders were all entirely comfortable with short passing triangles in the middle of the park, but they needed quality on the flanks to penetrate Ross County’s defence. 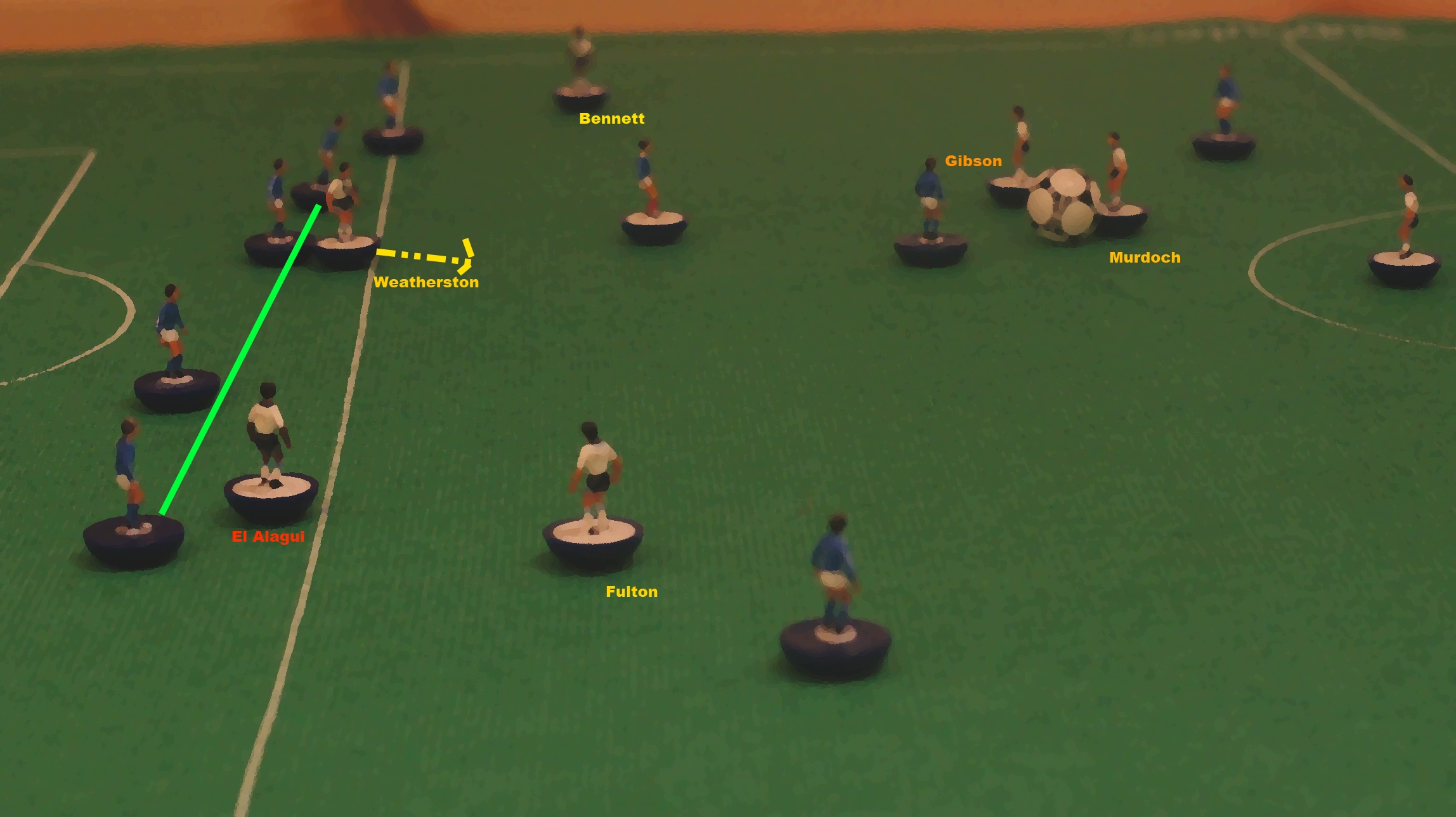 This picture shows Murdoch on the ball with players ahead of him to pass to.

It was interesting to see that wide midfielders Fulton and Weatherston were quite close to El Alagui in the first half in attacking phases. Gibson had a free role to link midfield to attack, while Millar and Murdoch were at the base of midfield.

Weatherston looked to partner El Alagui up front as often as he could, while Fulton more often dropped a little more deep to help keep possession. That left a lot of space on the flanks for the full-backs to use, but Bennett and Scobbie are both essentially functional centre-backs that kept simple possession at best. Ross County’s defence was never stretched.

Ross County dealt with the presence of El Alagui up front quite well, as they have done for the most part of the four league matches played against Falkirk this season.

This picture illustrates how County sometimes dealt with El Alagui. While Boyd and Munro competed in the air against El Alagui when he was in their vicinity, they simply stood off him when he dropped deep. The County defence’s focus was on winning the ‘second ball’ i.e. the headed flick-ons. 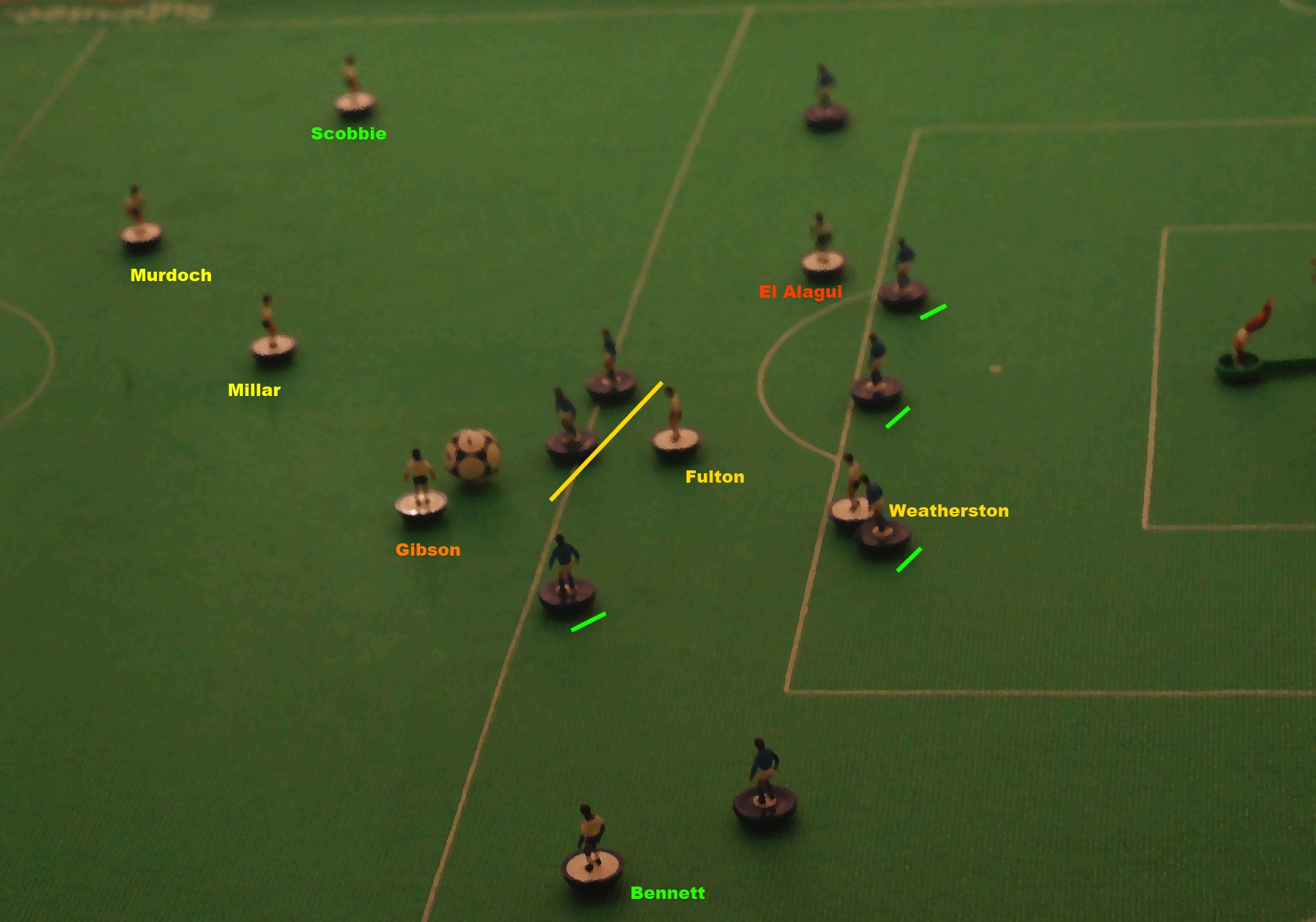 Meanwhile, Gibson didn’t find the space to create in the way he ought to have liked. Lawson and Kettlewell would have naturally marked Murdoch and Millar. The County duo’s marking was complicated by Fulton and Gibson playing across the pitch, but they key to County’s midfield defending well was to get goal-side and let Falkirk try to break them down. With not much attacking quality at full-back, it was going to take something special from the centre of midfield.

Gibson was substituted after McGovern’s sending off, to allow debutant Graham Bowman to keep goal. That substitution had as much to do to effect the match as the penalty and red card.

This Falkirk supporter thought that he might be in with a chance of playing instead of Gibson. He showed some credentials, by ghosting beyond County’s security, but his lack of experience showed with his underwear tripping him up towards the centre circle.

Ross County were always looking to test the inexperience of centre-backs Wallace and Kingsley together, with veteran defender Darren Dods being suspended. 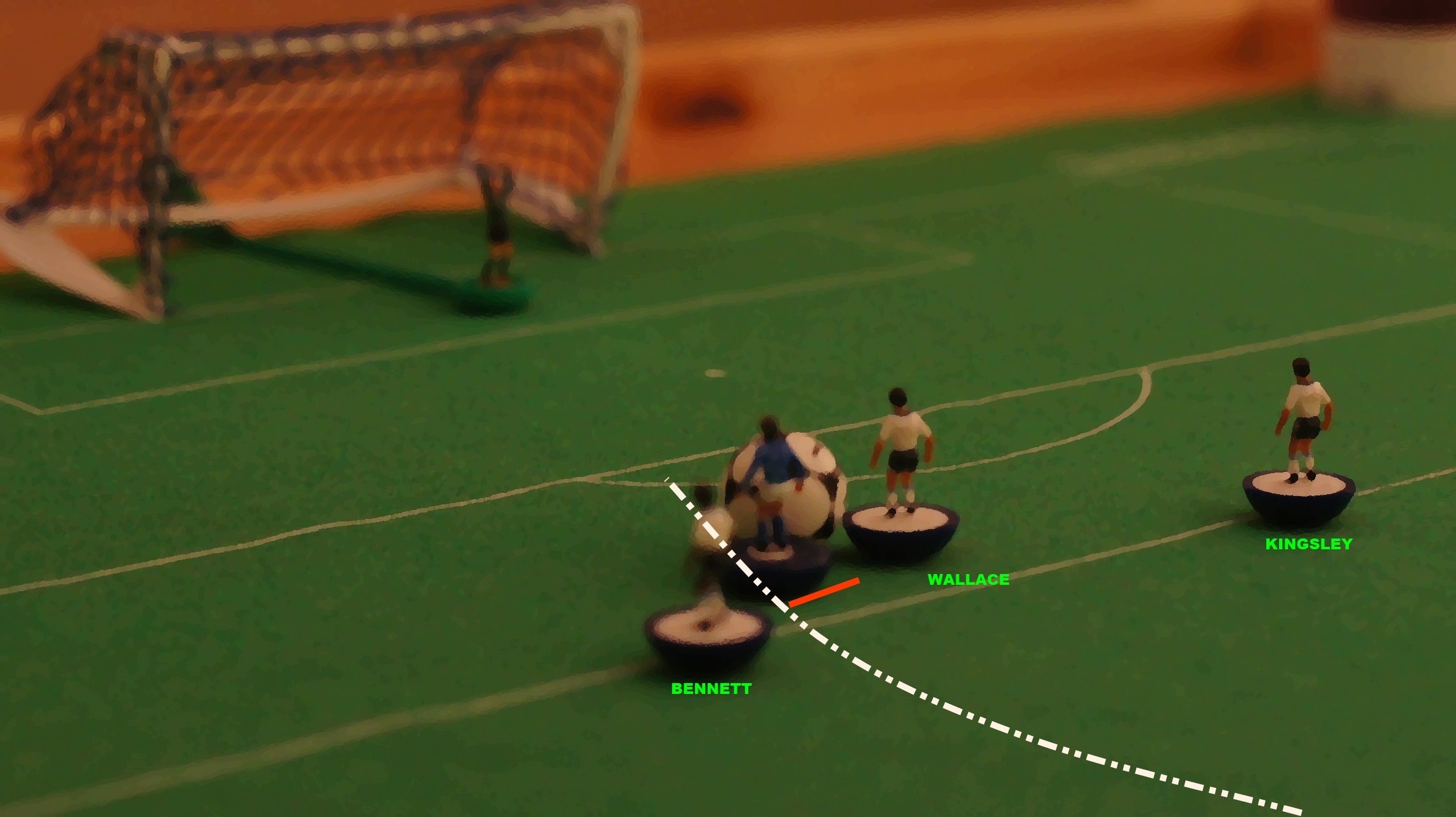 While Murray Wallace looked assured through most of the rest of the match, he never looked comfortable when having to chase balls played behind him. As the famous Norway coach Egil Olson says (without any great eloquence), putting the ball in the ‘back room’ (behind the defence) is one the most important aspect of creating chances and winning matches.

Ross County have used a direct approach throughout the season, with balls played in the channels behind centre-backs. It has been an effective tactic, as a change of tempo and as a diversion from a more general passing game across the width of the pitch.

County ought to have taken advantage of the lack of defensive stability in Falkirk’s team, caused by Wallace and goal-keeper McGovern scrambling to keep McMenamin at bay. McMenamin played the ball across the penalty box and the eventual shot came to nothing.

The lack of experience at the back soon told, with Kingsley put under pressure to play a pass-back to McGovern. The pass was poorly executed, as a half-volleyed lob towards McGovern, which McMenamin intercepted and then drew a foul. It was not McGovern’s fault, as Kingsley should not have made the scenario as near-impossible to deal with for McGovern as it was. Kingsley could have simply punted the ball out of play.

It did not take long for Ross County to score another, with Rocco Quinn shooting hard into the near top corner after a deep cross from Richard Brittain. Quinn had an encouraging display, playing the left-midfield role solidly, then eventually moving into central midfield and slowing the tempo when County needed to.

It was suggested earlier in the article that Gibson’s sacrifice had a large effect on the match. Falkirk changed to a 4-4-1 formation in defence, with Fulton and Weatherston still looking to play more narrow towards El Alagui.

However, the space behind El Alagui that was vacated by Gibson allowed County’s play-maker (and sponsor’s man of the match) Paul Lawson to dictate the rest of the first half and some way into the second. Lawson’s ability to bring the full-backs into play quickly and accurately kept Falkirk pegged back for long spells. El Alagui sometimes attempted to challenge him on the ball, but Lawson was able to play passing triangles with his centre-backs to retain possession.

The Lawson-Kettlewell partnership is still unbeaten in the league this season. That is predominantly down to their understanding between them. The passer-runner combination suits their attributes [see Zonal Marking’s video commentary on how a successful midfield partnership can work). The picture above shows Kettlewell making a burst beyond Wallace in defence, with Lawson’s pass finding him, setting up another dangerous move on the edge of the Fakirk penalty area.

Into the second half, Lawson found time to shoot outside the box a few times, which tested Bowman in goals. Falkirk sat deep at times and were well organised; it was not often that County found space behind their defence again. When Richard Brittain did exploit space on the right flank, a couple of times, his final ball failed him.

Despite playing with a man less, Falkirk’s midfield gave a good account of themselves, with little penetration. The one time that Weatherston got to the bye-line, it was Fulton and not El Alagui that met the cross into the box, which came to nothing. El Alagui had one headed chance himself, which fell softly wide.

It took a strong run with the ball from defence from Wallace to win a free-kick from which Millar scored. It was a superb strike that Ross County goal-keeper Fraser could do little about, on the only shot on target on his goal during the match.

Falkirk passed the ball really well in midfield at times, keeping possession in tight spaces with one-touch combinations. This frustrated the home crowd, who could not appreciate that County were still in quite a comfortable position and that County could defend adequately around the edge of their own box when required. 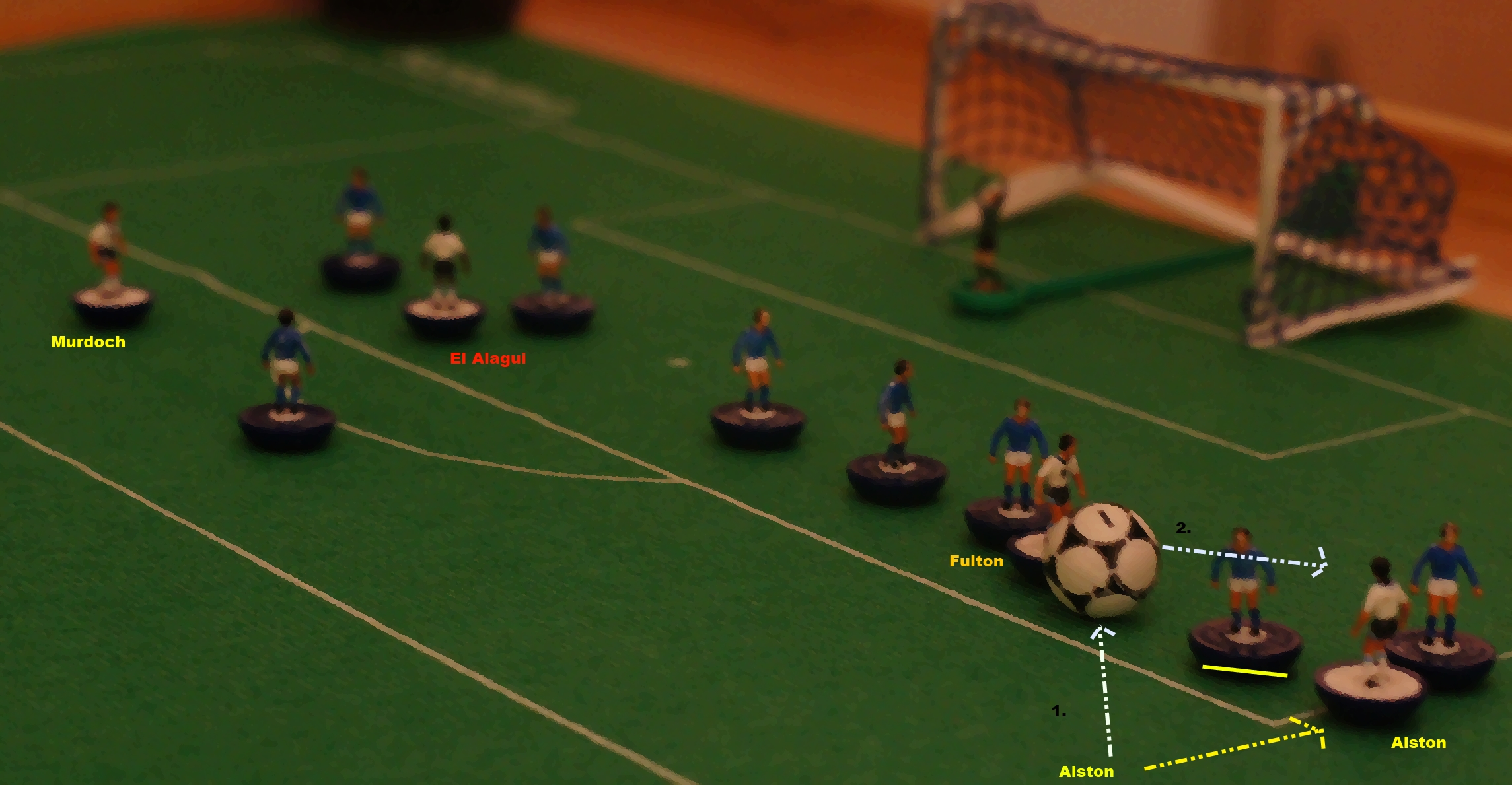 However, the lack of penetration was in spite of improved performances in the second half, particularly from Jay Fulton. Fulton played across the midfield in support of El Alagui. With experience and some improved body strength, he is one of many Falkirk players that will do well in the SPL.

END OF THE MATCH Falkirk felt that they could equalise and went with a back-three system, so that they could introduce White up front. White never proved much of a threat and it meant that County could find a little more space on the flanks to hold on to the ball.

Ross County, it seemed, did not fully know whether to sit on the lead and see the match out, or to attack further and cast little doubt on the outcome. In the end, they did both and neither. The end of the match was at times played at a frantic pace. The tempo was urged on by the crowd. The audience was incredulous when Quinn and Lawson tried to slow the match down later on.

When El Alagui was sent off, the last few minutes of the match were comfortable for Ross County.

Looking at the match as a whole, Falkirk tried their best in spite of having to play with a man less for most of the game and missing some key players to them.

It is telling that Ross County coped better with the suspensions to players in both teams. Ross County’s replacement (an experienced player in SFL1 and the SPL) scored the winning goal. Falkirk’s replacement full-back contributed little going forward, while the replacement centre-back showed his lack of experience and causing a game-changing moment with the penalty and red card.

However, Falkirk are a very good team in the making and will be favourites to win the title next year, if they don’t win it this season.