Ross County just about held on to a draw in this match, after a second half resurgence from Partick Thistle turned into an onslaught.

Thistle might have felt a 2-0 lead to County early in the second half flattered the home team, but County did probably deserve to be winning by at least a goal at that point. Up to then, Ross County’s tactics and style of play was superior to Thistle, but Erskine’s introduction for Thistle on the wing with half an hour to go changed the match completeley. Ross County started with the same XI as in my preview to the match (as the first of the two suggested teams). Even though the selection was the same, County did set up slightly differently, in a 4-4-1-1 formation with Brittain and Corcoran the wide players. Gardyne got to play in his favoured position, behind the central striker.

Partick Thistle’s team would have been more easy to predict than County’s, until Thistle signed Hutton on loan from Rangers. His immediate inclusion into the team saw Scott Robertson lose his place to Hutton in defensive midfield, so Robertson replaced Balatoni and dropped into a centre-back role. Thistle lined up with a 4-4-2 diamond formation, that saw Tommy Stewart play behind the two strikers and the rest of the midfield play relatively narrow behind him.

How did the formations play out against one another? On the whole there were two different styles on show. Thistle tried to play possession-based football, to bring their full-backs into play high up the pitch and feed the strikers around the edge of the box. County on the other hand played quite a high defensive line and looked to strike quickly on the counter-attack, getting Steven Craig on the goal side of Thistle’s defenders as early as possible (as suggested they should do in the preview).

Neither side had a numberical advantage in a tactical sense prior to the sending off. The spare, un-marked players in possession for both teams were their full-backs. The two teams tried to get their full-backs forward when they could. From the amount of chances created and on the run of play during the first half, County executed their plan – of defending high and attacking quickly – better than Thistle did theirs.

It is fair to say that Partick Thistle’s players hardly had a chance during the first half. Any threat came from the occasional run beyond the Thistle forwards by their wider midfielders, Cairney and Rowson.

There are arguably two reasons for Thistle not offering much up front. The first is that the shape the triumvirate of Elliot, Doolan and Stewart (playing deeper and between the two) was too narrow and predictable.

Thistle’s problem of a lack of width was exacerbated by how high up the pitch County’s defence was willing to play in the first half. Although there was space behind, Thistle’s forwards never really out-paced Scott Boyd whenever any balls were played through. It took runs from deep – from Cairney and Rowson – to penetrate in the first half, but County’s defence coped well with these runs and County’s goal-keeper Fraser offered support as a ‘sweeper’ behind the defence.

When Partick Thistle had the ball, generally speaking they had a slow possession-based approach. They tried to play out of defence when they could, with Rowson, Hutton and Cairney looking to collect the ball from the full-backs.

This was Hutton’s first match and he did look a little nervous at the start, not looking forward but playing his passes back to the full-back or goal-keeper, rather than attempt a comparitively risky pass further up the field. He eventually gew in confidence as the game went on, which was one reason for Thistle’s ascendency later in the match.

For large parts of the first half, when Hutton was at his most nervous, the full-backs had no option but to try and find the forwards from deep. Every long ball was dealt with by Munro and Boyd, who with the full-backs could always find one of Lawson or Quinn.

With County compressing the space on the pitch from top to bottom i.e. from County’s defence to attack, County’s central midfielders Rocco Quinn and Paul Lawson had less ground to cover. They also had a shorter distance to play through balls on to Gardyne and Craig up front.

As possession turned over to County, the first thing Lawson and Quinn looked for was the quick out-ball to Craig up front. Steven Craig tried to stretch the defence on his own, by holding a high position on the blind side of the far centre-back, who tended to be Scott Robertson, nominally a central midfielder. Lawson always had his head up in possession and would play diagonal balls to Craig. Unfortunately for Craig he often struggled to find balance to shoot with his left foot in increasingly slippy conditions.

County led at half-time from a Brittain penalty and could have scored a few more, either from a spell of possession or especially from hitting on the counter attack. Partick Thistle looked vulnerable in the centre of defence, but were not too far from becoming dangerous in attack.

Thistle’s best play in the first half came from some width from their right-back Paton’s forward runs and Rowson helping him on the inside.

County continued to control the match into the second half. They scored a second goal early on from a set-piece, but looked dangerous in every attack up to around the 70 minute mark.

Three game-changing elements happened at that point. The first was the removal of Corcoran for Byrne, who went up front to partner Craig. Brittain went wide-right and Gardyne went wide-left. Corcoran didn’t look to be tiring as obviously as in other matches and the changed looked to be more of a strategic decision.

The second was that Ross County started sitting more deep (and there were hints of it immediately after the second goal). County looked content to concede possession and territory to Thistle. The reason for this was possibly on the basis that Thistle’s defenders would have even more space behind them to exploit.

However, the more probable reason for County retreating was a change in mentality in the players in not knowing how to close out the game.

The third and biggest reason for the change in the pattern of the match was the introduction of Erskine. Thiste manager Jackie McNamara changed his team’s system to a flat 4-4-2. Stewart was replaced by Erskine who moved to the left wing; Cairney moved to the right.

Erskine is probably unique in the First Division as a winger who is as dangerous kept on the wing as he is in driving towards the goal. County simply couldn’t show him on to his weaker foot and to the inside of the pitch, because he was happy to drive on regardless (even if he is predominantly left-footed).

It was on 72 minutes that Erskine ran with the ball on the inside, with left-back Sinclair over-lapping on the outside, that won Thistle a penalty and had County’s right-back Gary Miller sent off for handball. Erskine made an excellent run to run around the goalkeeper, but by the time Erskine set himself on his left foot again, County’s goalkeeper was in a position to save and Miller will be disappointed to have handled the ball when Fraser was immediately behind him. 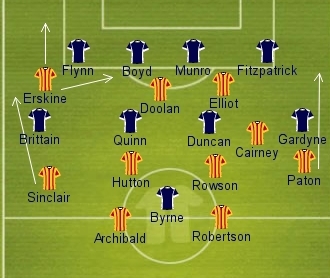 So, Thistle got a goal from the penalty and Miller was sent off. Derek Adams had to make some changes and the diagram above shows the shape of the play for most of the last twenty minutes.

Thistle had their tactics spot on at this stage of the game and it showed, with clear dominance in possession and territory. They dominated for the following reasons.

All in all, County had the better of the first 60-70 minutes and to that point looked like they were cruising to victory, but Erskine’s introduction and Miller’s sending off changed the match. Derek Adams will be disappointed to see his team defend deep for such a long period. There were parallels with Scotland’s recent win over Lithuania, but County didn’t luck out in the same way as the national team.

On the other hand, Thistle manager Jackie McNamara gave what was almost the perfect lesson in how to make the most of the opposition’s sending off.