Ross County lost to a late sucker punch by St Johnstone’s Frazer Wright at a corner kick, but despite incessant pressure from the home team in the second half the visitors created the better chances to win.

Ross County began the more promising of the two teams and Gary Glen was unlucky with a couple of half-chances made. County then had the best of possession but a number of long range attempts from outside the box rarely threatened Alan Mannus’s goal. County’s ascendency for the first twenty minutes of the match was largely due to the quick passing and switching of play among their midfielders which dragged some of St Johnstone’s defence out of position. St Johnstone then made a minor change to their set-up after the first quarter of the match gone. The away team switched from a 4-4-1-1 with Rowan Vine supporting Grégory Tadé, to a more general 4-5-1 with Vine moving to the left flank and Liam Craig coming infield from the left. The change worked, with Craig only taking one attempt to score from 25 yards compared to the handful of equivalent missed attempts from Ross County to that point. St Johnstone scored their goal on 30 minutes but had been looking dangerous for around 10 minutes leading up to then, as a result of the threat on their right-wing, particularly from the over-lapping Gary Miller getting to the bye-line and into the penalty box.

After 33 minutes, the pattern of the match changed completely when Vine pushed over Richard Brittain immediately after an attacking advance in County’s deep left-back position. Vine was red carded and St Johnstone continued with a 4-4-1. Into the second half, Ross County pushed forward with the 4-4-2 formation but also their full-backs much further up the pitch, more often than not leaving County’s centre-backs to deal with Tadé alone in a 2-4-4. County, on the whole, struggled to create against such a deep-lying St Johnstone defence, but did make enough opportunities to score from over-loading on the flanks and the edges of the box. However, despite Sam Morrow sticking a leg out to equalise on 68 minutes, the home team were guilty at snatching at the ball in the visiting penalty area. Immediately after the equaliser, there looked to be only one likely winner at that point, but St Johnstone were clinical in their breaks forward – the away team hit the woodwork twice and scored the winner from a corner kick. Ross County began the match in a conventional 4-4-2 formation. First choice forward Colin McMenamin was only fit enough to make the bench, so that allowed Sam Morrow and Gary Glen to start up front. The other nine players remained unchanged from the recent draw at Dundee United. Richard Brittain continued to partner Stuart Kettlewell in central midfield, with Martin Scott on the bench and Paul Lawson in the stand.

St Johnstone made a couple of changes since their recent win over Celtic, with Murray Davidson and Peter Pawlett making way for Nigel Hasselbaink and Chris Millar. St Johnstone began with a 4-4-1-1 and Vine supporting Tadé.

Ross County’s midfield started very brightly and made good use of their possession up to a point. The first and second passes through midfield were typically snappy. As is so often the case with Ross County under Derek Adams, the midfield was always looking for the quick switch to the flanks to exploit space behind full-backs in the transition from the opponents’ attack to defence.

Indeed, Ross County captain Richard Brittain had an impressive first half, using his deep-lying midfield role to keep possession ticking over and getting the ball to wide areas quickly where County could find the space to attack into. A couple of mis-placed passes were the exception to a commanding performance.

However, in truth Ross County did very little with the ball from advanced wide areas in the first half. Alan Mannus did well to hold a low cut-back from Rocco Quinn in after 5 minutes, but he was not overly threatened in goal. At least a part of Ross County’s failure to create and score from clear-cut chances in the first half was down to the reluctance of Ross Tokely to overlap Rocco Quinn when it mattered and Marc Fitzpatrick’s final ball when he did get into advanced positions. 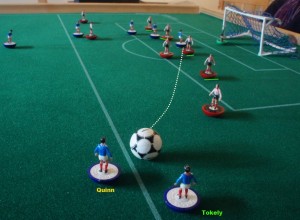 If any defence had to concede to letting crosses come in at all, they would likely choose this position, with the centre-backs’ positioned such that they could keep an eye on both their marked forward and where the ball was coming from. Although Tokely got forward to some extent and sometimes further forward than Quinn, it was often too late in the build-up to the final ball to be an effective option. Fitzpatrick did a much better job of getting forward on the left flank, but his crossing on the whole let him down. His positioning could not be faulted though and he did an excellent job of keeping the pitch stretched on his side until he was substituted.

From Ross County’s point of view, it will have been frustrating to see space on the flanks not used properly, because when two 4-4-2 (or a 4-4-2 and 4-4-1-1) formations meet it is the full-backs who are typically un-marked and able to make an obvious but telling contribution in the match. 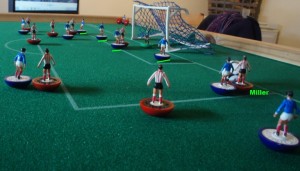 In that respect, St Johnstone’s Gary Miller showed Ross County what they were missing. He got to the bye-line a couple of times in the 10-15 minute spell that St Johnstone grew into the match. Although in this instance Fitzpatrick was tucked in and dealt with the cross comfortably, the contrast in attacking ability from full-back areas in the two teams was obvious.

Ross County’s other main route to goal was through long shots outside of the box. St Johnstone’s centre-backs Frazer Wright and Steven Anderson stood up well to the attempts and they – with the midfielders in front – blocked most shots that would have been on target. 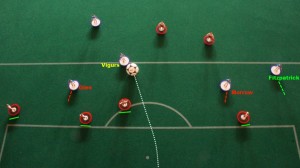 Iain Vigurs was typically an influence on the match, finding pockets of space between midfield and defence on countless occasions. Although he saw plenty of the ball he did little effective with it. He had more attempts at goal than anyone else on the pitch, more often than not from distances that tested his normally immaculate technique. In the illustration above, he was perfectly entitled to shoot because of the gap in defence (which he did without being able to trouble Mannus), but he would have done well to use the time available to lift his head and see the overlap on both sides. Although St Johnstone began the match with a very similar formation to what they changed to after 20 minutes against Celtic to great aplomb, it was not until the visiting team reverted to the 4-5-1 after the first quarter that they looked dangerous.

The key change in the formation was allowing Liam Craig to come infield. He started on the left but was tucking inside in any event, which happened to be one of the reasons why County found so much space on St Johnstone’s left until the change. Vine went to the left but constantly switched wings to try to test each full-back. 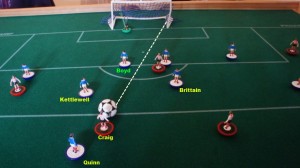 With Craig in a more central position, he did not need much encouragement to shoot from distance to beat Michael Fraser in goals. Stuart Kettlewell could not chase down the shot in time. It looked as if Fraser’s position in the goal was a little too right-of-centre, but Craig’s was an accurate strike.

St Johnstone then briefly looked the better team until Vine lost his temper after a Richard Brittain clearance. St Johnstone held firm for the 12 minutes until half-time. Derek Adams used the break to re-strategise. Ross County made a key substitution at half-time, bringing on Mihael Kovacevic for Ross Tokely. While both players are tall players who look more like centre-backs than full-backs, the Swiss was much more comfortable in possession and in over-lapping Rocco Quinn. County pushed on with a high 4-4-2, which left the centre-backs to deal with the isolated Tadé.

For the first 15 minutes of the second half, County found it difficult to break down a resolute St Johnstone defence. County lacked a creative touch around the edge of the penalty area and perhaps an out-and-out winger to deliver good crosses on a consistent basis.

It took a one-off forward run by Grant Munro to over-load St Johnstone’s right-hand side to create the equalising goal. Morrow stretched to finish Munro’s drilled ball into the box. With Ross County having all of the pressure on the visiting team and all of the possession of the ball, it seemed that the winning goal would eventually arrive. 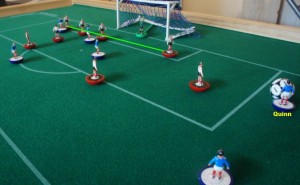 However, despite the St Johnstone unit contracting inwards, which allowed space on the overlap for crosses from the bye-line, Ross County could not find the finishing touch in the penalty area. St Johnstone’s back four were a credit to their manager – but for Munro’s run causing stress to the back line, the defensive shape remained intact at all times, which made the last-gasp defending a less complicated job than it can be in such situations.

Ross County had to be wary of the counter and by the end of the match, St Johnstone could have won 4-1. Murray Davidson – who did a superb job in front of his defence when he came on – hit the underside of the crossbar; Frazer Wright scored from a corner kick and Dave Mackay hit the post with a stunning free-kick. Although Ross County were effectively playing a 2-4-4 formation at the end, leaving only two defenders, it took Tadé and later Steven MacLean to hold the ball up to make those chances. Tadé in particular has an envious ability to keep two defenders occupied at one time by his sheer physicality; it is telling that Ross County do not have a player who can do the same either by pace or strength. Scott Boyd had his best match against Tadé and Munro was arguably County’s best performer on the day, but with open channels to run into late in the match, Tadé still did enough for his team to move forward.

Ross County were therefore beaten at home in the league for the first time since April 2011 and their overall 40 match unbeaten league record came to an end. In the top division in the country the margins between losing and winning can be tight and with 20 attempts at goal compared to St Johnstone’s six, it will be a difficult lesson for the losing team to learn.

Although Ross County’s resources might not compare to St Johnstone’s at this moment, it is still feasible to objectively compare squads. Ross County missed the naturally attacking full-back from last season (Kovacevic might yet be the answer) as well as a technical player to link midfield and attack around the edge of the box (a match-fit Fotheringham might be useful in that respect). More crucially for the SPL, County miss a forward who can occupy a defence on his own either by sheer pace or brute strength. However, the Ross County team will win matches this season by playing worse football and it was refreshing to see such an attacking bias in the second half, despite the limitations in the squad. Derek Adams certainly did as much as he could with the match-day squad that he had chosen to try to win the match.

St Johnstone have won two matches in a row and now have a platform to build the season from. It is obvious to see why they succeeded last season: a solid but balanced defence and midfield can be ‘Top Six’ material once again when partnered with aphysical presence up front.