Due to time constraints, this post will be more condensed than typical.  Some of the points in the preview were still relevant to the match, so it is worth having a read of the preview if you already haven’t.

Ross County ended up with a comfortable victory, and probably should have scored more goals than that, against an Ayr team that wasn’t quite that bad.

Ayr United’s numerical advantage in midfield was never turned into dangerous possession at any point, although they did look a good side in possession up to a point. In the end, County’s goal-keeper Michael Fraser was only ever tested by a couple of crosses that went un-challenged.  It was a strong Ross County performance overall, including the defence, which meant that there was only one likely winner in the match. How the teams set up, against how they matched on the park.

Ayr United lined up as expected in diagram 1 of the preview, with a 4-5-1 formation.

Ross County also lined up as per the first diagram, with the only change being Sam Morrow’s home debut in place of the injured Gardyne.

The result was that Ayr had three central midfielders to County’s two, with Trouten often the ‘spare man’ at the top of midfield. Trouten had quite a poor, ineffectual match in the circumstances, given the space he could have found.

Looking more closely, Trouten didn’t do enough in the match because his positioning was poor. There might be a reason for this, because Mark Roberts dropped deep to help in possession and this might have cannibalised Trouten’s own ‘play-making’ space.

Otherwise, Trouten was either too high up the pitch when his midfielders needed help in possession, or he was too deep and was easily marked by a County midfielder.

Mark Roberts had a really good performance for Ayr, without ever getting a shot on goal. He was involved in all of Ayr’s best build-up play, by dropping off County’s centre-backs and finding space behind County’s midfield to play wide midfielders Moffat and McGowan into the game.

From Ross County’s point of view, the centre-backs Boyd and Munro were disciplined in keeping their defensive shape, rather than chasing Roberts into areas of the pitch that would bring danger to their own defence. 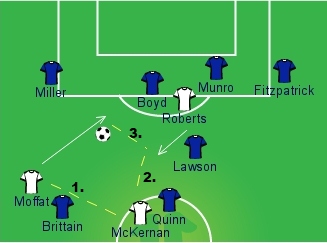 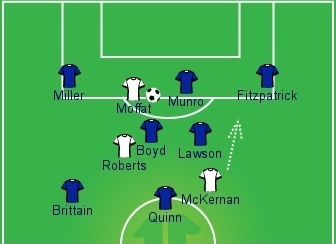 What could have happened if Boyd wasn’t disciplined in his positioning.

County’s defence keeping their shape was crucial to the team keeping a clean sheet. This was because Adam Moffat was constantly coming in off the left flank and looked for space to exploit, without ever threatening due to County’s defensive solidity.

All four of Ross County’s midfielders had strong games, which was crucial to the result because of the numerical disadvantage to Ayr’s midfield.

Rocco Quinn was perhaps the most quiet of the quartet, curtailed to some extent by an early yellow card for a challenge on Trouten. He does seem to be developing a balanced partnership with Lawson though, which is surprising to some extent due to them both being more play-making midfielders than destroyers.

Paul Lawson was arguably the pick of the midfielders today. It seems this site always goes on about Lawson, but although he might not be the complete midfielder, he offers something that most central midfielders of his type in Scotland don’t give.

To quote Chelsea manager Andre Villas-Boas from what is a now – relatively – famous interview with a then student but now scout for Villas-Boas:-

Top teams nowadays don’t look to vertical penetration [i.e. up and down the pitch; from goal to goal] from their midfielders because the coach prefers them to stand in position (horizontally) and then use the movement of the wingers as the main source to create chances.

So, you, as a coach, have to know exactly what kind of players you have and analyse the squad to decide how you want to organise your team offensively. And then, there are maybe some players more important than others.

And, except Andrea Pirlo and Xabi Alonso, and maybe Esteban Cambiasso and one or two more, they are players that are limited to the horizontal part of the game: they keep passing the ball from one side to another, left or right, without any kind of vertical penetration.

Can’t you use your defensive midfielder to introduce a surprise factor in the match? Let’s say, first he passes horizontally and then, suddenly, vertical penetration? 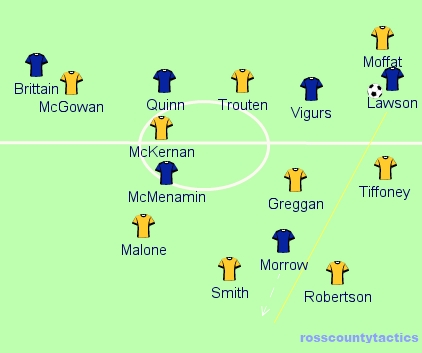 However, occasional ‘vertical penetration’ with long, defence-splitting passes, when most other midfielders look for the easy side-ways pass, marks him out as an asset to have at First Division level.  It was indeed a 40 yard ball between Ayr’s centre-backs that gave Morrow the chance to score his goal on the counter-attack, as the diagram above shows.

It would be unfair to concentrate on Lawson, when arguably Iain Vigurs was the best midfielder on the park. He did hit a number of loose diagonal passes, but was otherwise influential in coming off the left flank and combining with Lawson, Quinn and the forwards. He is a class act at this level and although he isn’t the quickest player in the game, he has the ability to play in the SPL.

Indeed, with Ross County playing two forwards, and in the slippery conditions, it looked like County’s strategy was to put Ayr’s defence on the back foot with occasional early, direct balls to deal with. Morrow and McMenamin didn’t look an established pairing, because quite simply that was the first time they played together. Nevertheless, both forwards chased down any balls played into the wide channels to bring others into the attacking move and occasionally showed glimpses of good combination play.

Ayr United have now conceded four goals in their last three league away matches, which is poor form in any context. With the winter still to come, which is traditionally a challenging period for part-time teams, they might struggle to stay clear of the relegation zone.

Having said that, they have a relatively fluent system with Roberts dropping off and Moffat cutting inside. If they had a more penetrative midfielder that could run beyond Roberts when he drops deep, they would be a much better team.

Ross County now look to have an established back-line, a gelling midfield and two hard-working forwards that can score goals. Dundee away and then Hamilton at home will be the acid test on County’s hopes of finishing in the top 3 this season.